I am writing this blog as I am on the plane to Winnipeg for cross Nationals! It has been a busy month for me! Track Nationals took place a month ago in Milton, Ontario on the new Mattamy Velodrome, built for the Pan Am games. People had told me that the track was nice and fast to ride on, but it was even more amazing than I imagined! Riding the track was like riding on velvet, and the facility was absolutely gorgeous! They always had the heat pumping, turning the building into a sauna which made for some fast conditions.

My dad (aka coach) and I flew in on Wednesday night, and did a midnight shopping spree, powered by jetlag. Thursday, we got to the track to watch the elites race and get some Team Pursuit practice in. Racing for the u17/juniors kicked off on Friday with the team events. First up was the Team Sprint, which I signed up for last minute with Margaret Ovenell (Devo). We had never done it together before, and even though we didn't make the finals we had fun trying! The u17 BC composite Team Pursuit team consisted of Erin Attwell (Tripleshot), Sarah Van Dam (Tripleshot), Margaret, and I. We rode a smooth fairly consistent 12 laps (3 km) and ended up second, 4 seconds behind Team Ontario, which meant we had made the finals. After carefully choosing who would lead and how many laps we would each do, we went into the finals even more prepared, and closed that 4 second gap to finish second, but only less than 1 second behind Team Ontario! I am really proud of our team and how we pulled it together and almost closed that gap! You girls rock :) <3

Saturday brought with it another 12 consecutive hours inside the velodrome. I swear that by the end of the weekend we were all going a little crazy from lack of fresh air and sun deprivation (haha). My dad and I were so on it that we slept passed our alarm every single day that we were there, so it was always a mad dash to get to the track for warm up (good thing it was only a 3 minute drive ;). The first morning of the omnium, opened with the scratch race. As per usual, I attacked and bridged and raced as aggressively as I could without killing myself. It was so cool to race with 18 other strong u17 women! By the final lap however, I had boxed myself in and just managed to squeeze out for a second place finish behind Ruby West (Kallisto). Following that, we had the sprint tournament qualifications- a flying 200m. The line was quite different for a 200m on that track compared to Burnaby, so my warm ups were spent riding the line over and over and videoing the elites the day before. That studying obviously paid off because I laid down the top u17 female time and a PB- 12.75 seconds, which gave me a by for the quarter finals= salad time!

The afternoon session was probably the highlight of my Nationals experience. The Individual Pursuit. The most painful 2km (8 laps) you could imagine. Mastering the IP is an art, from figuring out your lap times to the pacing, to the line you ride and your standing start at the beginning. And I apparently executed it almost perfectly. I won the National title in that event and put down a PB by 6 seconds and almost a qualification time for Worlds- 2:34 seconds (Qualification for Worlds= 2:32). And that was ridden without disk wheels and with a gear restriction! I am very excited to see what kind of time I will be able to put down at trials in April! That left Ruby and I tied for the omnium lead. Last race of the night was the elimination race. My strategy going into it was the classic sit at the front for the whole race and not let anyone come over top or box you in. However, on lap two when the realization set in that I would have to be at the front for 38 laps (elimination every 2nd lap) I laughed to myself and thought "what the heck am I thinking?!?" Regardless, I pulled through and did it and was able to play cat-and-mouse on the last 2 laps to win it.

Already the last day of track Nats :( We slept passed our alarm again, but got there just in time for the sprint tournament. I love the sprint tournament because it gives you 3 laps to execute your plan (you always have a plan going into it) and play with your opponent. Thanks to these two things, I won each of my sprints and ended up defending my National Sprint champ title that I also won last year! :) 3 races to go! Perfecting a race diet is difficult, especially with me and my extremely finicky and sensitive stomach since my appendix burst, so I went into the 500 time trial a little food deprived. But despite that, I didn't execute the best standing start and Erin Attwell beat me by 3/10th's of a second! In a race that short, one little mishap can drop your time drastically, so skill and knowledge about how to ride it are very important.

2 to go! The flying 250m. I love these because you give it everything you've got for one lap and hope it pays off. Then perfecting your line as you near the start line is equally as crucial. The people sitting in the stands must of thought I was crazy, because as I was picking up speed at the rail I was talking to myself, telling myself to "Go faster, go faster!" entering the flying lap. Another proud moment! I was the only u17 girl to crack 16 (15.7) seconds in the flying lap and wasn't too far off some of the u17 boys times! The last race was a very sad and exciting moment for us second year u17's. This would be, for most of us, our last race as a u17, but excitingly, that meant disks and unlimited (well, almost) gears for the future. Oh, and World Championships! I executed some awesome sprints and took all the first place points in the Points race, tried to take a lap but was bogged down by the gear and reeled in by the powerhouse of girls behind me. 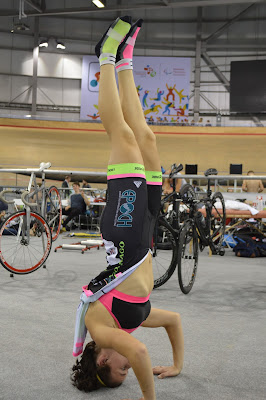 An amazing, 10/10 experience, with 3 golds (Individual Pursuit, Sprints and Omnium) and 2 silvers (Team Pursuit and Time Trial) and of course the funnest (yes, it's a word ;p) times with the best people! Now time to decimate at Cross Nationals! If I get top 3 on Saturday, I qualify for Worlds in January (Belgium). No pressure, right?