So my season started out with an adventure down to Enumclaw, Washington for the Mutual of Enumclaw Stage race. There were about 30 cat. 1/2/3 women in our field, which made the racing fast and exciting!

First up was the time trial, Mercx style. It was a beautiful 10 km TT out on the windy roads in the farmland part of Enumclaw. I finished 15th in the TT, just over a minute down from the leader, but felt strong and that overall, I had a good TT. We followed the TT with a pancake brunch at our traditional breakfast place. 7 hours to chill, then warm up time for the infamous, fast, 8 corner criterium. I have been incorporating some gym workouts into my warm up, off the bike, and it has so far really helped me warm up everything from my arms to my core, and also, my balance and focus, instead of just my legs. During the crit, I watched for moves, and stayed in the top 10 for the majority of the race, and also won the sprints for 3 x 3 second time bonus primes. It came down to a bunch sprint for the win. I ended up 2nd to Sara Bergen (Trek Red Truck) in an almost photo finish!

Confidance boosted, I went into the road race the next morning with the determination to get away and make up the time needed for me to slide into top 5, or on the podium in the GC. The flats brought with them lots of cat and mouse games, with some attacks, that used the hill to try and stay away. The over 5 km climb on the hill brought with it a hammerfest, and the group splitting each lap. I managed to stay with the lead group until the last lap, where I almost got dropped. Yet, I was with 2 other girls and we chased hard and jumped on the back of the pack before the long decent. Once again, it came down to a pack sprint and this time I got third in cat.1/2 women (on junior gears ;p)! All in all, I was super happy with how the week went, even though my time bonuses were only enough to move me up to 9th in the GC.

The following weekend was Youth Provincial Road Champs in Penticton! The weather was super hot and nice, and the courses were some of my favourite courses that I have almost ever ridden! It was a 21 km time trial out through the rolling streets in the farmland. My dad/coach, sister and I obviously had to do a pre-race ride the night before, so I could check out all of the pretty animals beforehand, so they didn't distract me during the TT! ;) 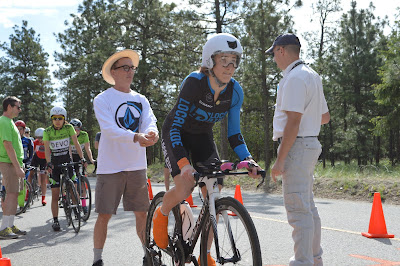 I had a great time trial! We had dialled in my fit on my Colnago K-Zero TT bike, and it felt super comfortable during the race. I ended up 2nd place, 8 seconds down from Gillian Ellsay. I personally felt that I had a great TT! The crit that night was cool as well, with 6 corners, and  it being a fast, solid course. We had a 35 minute race, with various attacks that almost stayed away. Again, it came down to a pack sprint, which I took.


That night, we had a banquet for the awards presentations and some talks. I was one of the speakers, along with John Wilcox, and I tell you, it’s not always easy describing your racing career on the spot, totally unprepared. But we did it! I am super happy I got a chance to give that talk in front of 100+ riders and parents and coaches, because practice makes perfect, and you may be fast on the bike, but proper speaking skills are so important to have to make it as a pro cyclist! 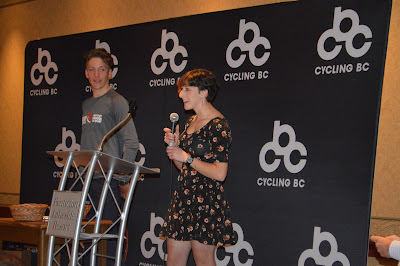 Last day in Penticton, brought sun again, but also storm clouds, and luckily the thunder didn't start until after our races. The road course was super tough, with a big steep climb, then some rolling flats with a head wind along the top part, then a crazy steep descent with sweeping, sketchy corners. The last part was a short stretch along the highway, with a 100 m 15% grade climb up to the finishing straight.

The road race dwindled down with attacks on the hill, until there were only 3 of us lefy for the last half lap. We had a match sprint type finish going up the last steep hill, then my attack was enough to hold them off and get the win!

Then there were Elite Provincials. The time trial happened to be my third race on my tt bike, and I had a great tt on the flat, windy 30 + km course. I came 6th. The next day was the road race. It was an 18km hilly, flat course (it had a bit of everything). I missed the first attack that went on the hill, along with the second one that bridged. Our race was 90+ km, and after a bit of negative racing because there were all these individuals then a few teams, it came down to a sprint finish for 4th. I attacked a little early and got 6th in that race as well.

The last day was the crit downtown in my hometown of Maple Ridge. Provincials this year was Race the Ridge and therefore run by my dad. So, before my race I did my part in volunteering (which was perfect, because I need the volunteer hours for school, anyways). Then my goal was just to make the elite women’s provincial crit champs as hard as I could and as aggressive as I could. I attacked, and got the primes, and countered and just raced as hard as I possibly could. I missed the one attack that stayed away, but she had help from a team and it becomes difficult sometimes, when you’re an individual against a team. I planned my final sprint perfectly, though, and won the bunch sprint, getting second overall in the crit.

Next up was the Robert Cameron Law Cycling Classic race. The Friday night started with a scratch race and sprints at a speedway. It was a neat way to start the weekend, although I also really liked it when they ran the TT along the ocean. This speedway was like the Velodrome, just without the banking, and I used my track skills and won all the primes in the cat. 1/2/3 women’s scratch race plus the race, and the match sprints that followed. Oh! It was also my first chance to debut my new Local Ride Racing CODE kit! 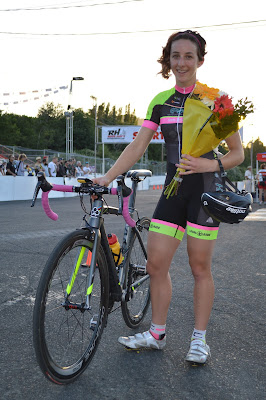 The next day was the hilly, all up or down, road race. Some attacks almost stayed away on the big steep hill, but the main field was aggressively chasing back on, so it came down to a bunch sprint uphill finish. I chose some good wheels and was able to sneak around and win the Cheemos Perogies Classic road race for the first time!


Last day was the criterium, and this year, it took place around the BC Legislative buildings, right downtown Victoria on the water. There was a climb on the straight after the finish, then a flat, then a descent with a sharp right hand turn into the finishing straight. There were more riders for this race, and Trek Red Truck had a full squad, as well as Mical Dyck was there (the announcer kept mixing us up because of our pink and green kits!). Early on, there was an attack by Kinley Gibson and she managed to stay away, despite our attempts at getting a chase group together. I pushed into great positioning on the last corner and was able to pull ahead and, once again, win the bunch sprint and get second overall. It was a great weekend of hard, addictive racing, and I can’t wait until next year! Goodness, race weekends are so fun and addictive! :)