So we flew home from Quebec Thursday evening and BC Superweek started Friday with the MK Delta criterium. With the races starting in the evenings, it gave us the morning to build up my bike and go for a shake down spin, pre-race. This was another learning experience for me- don’t eat certain things for lunch/dinner within three hours of a Superweek crit! I had a great start and hung at the front for the first bit of the race, then totally cramped up, got dropped and pulled with three laps to go. It wasn't how I was quite hoping to kick off Superweek, but I had 6 more races to prove myself!


The next night, I planned out my meals better, and was already over jetlag and feeling great! This race was the Brenco Delta crit and there were 60-70 female riders. Once again I had a great start, and tried to maintain a top 15 position during the race. Eventually, the crowd prime came around and I thought what the heck, I’ll go for it! I didn't get it, but three up sprinting with Lex Albrecht (Optum p/b Kelly Benefit Strategies) and Shelley Olds (Ale Cipollini) was pretty sweet! I didn't plan out my finish very well and ended up 16th. I couldn't race the UCI road race the next day, as I am too young, and still have to wait two years until I can upgrade to race it… age limits like that are so annoying! I mean, you still have to be fast enough and capable enough to race a race like that, and if you’re young and fast you should be given the chance!

So the third race for me was the UBC Grand Prix on Tuesday. There were even more riders, and it took place on a different course, which was tight and twisty and a bit sketchy. There was a big descent on one side and a narrow climb on the finishing straight. I had never finished the UBC crit before, especially when it was on the old course with the 360 U-turn. So I had to finish this year, and I did! I maintained my position at the front and even went with a break that almost stayed away! I one-uped my placing from Delta, and got 15th place. During the men’s race I got to ride in the lead car (the Tesla!) and it was so exciting! 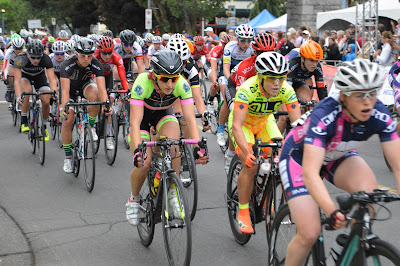 Gastown time! The next night was the famous Global- Relay Gastown Grand Prix, the race who has been won by even Lance Armstrong back in the day (no surprise there ;). There were over 80 pro women for this race. It was even fun pre race and post race because there is such an exciting atmosphere filled with media reporters and curious non-racers. It was great, because usually it’s just me at a tent warming up by myself, but for Gastown and some of the other races we had a group of other women who were all riding independently and needed a home base! This year, there was a kids race and my 12 year old sister got to experience the thrill of riding this incredible race! It was finally our start time, I got a call up, then the race was under way. I had so much family and friends there cheering and the support was awesome! I maintained great position and kept up with the high speeds on the descent and finishing climb. I had to put my foot down once to avoid a crash, but stayed upright, even on the rickety, sketchy cobblestones! I planned out my finish perfectly, and moved up with 3 to go, so I was sitting top 5 going into one lap to go. I got pushed back to behind 10th place, due to having to slow for almost another crash on the 3rd to last corner. I was able to make enough time up in the sprint and got 13th place! Afterwards, to pick up the prize money, we had to go up to a super fancy office and had a buffet and sat in the VIP lounge while we waited!


Day 5 of racing was the Giro Di Burnaby, with the 360 degree turn after the start/finish along Hasting’s street. Now my position wasn't so great for the first half of this race, but I didn't feel the threat of getting dropped. With around 10 laps to go, I decided enough was enough and moved back up to the top 10. I sprinted for a $200 prime, but didn't have quite enough speed to come around the leader. With 2 to go, just like last year, they rang the bell for the crowd prime, and I had such great positioning going into that last straight, that I won it…  for the second year in a row! I was so cracked after that, that on the last lap I finished off around 25th place.

The second to last race was the Whiterock crit, one of the hardest crits in my opinion. I had yet to finish this crit either, and it being my 3rd year racing it, I not only wanted to finish, but I felt that it was time for a top 10. Over 30 women were dropped in this high pace race, and there were attack after attack within the first 10 laps, always on the demanding climb. With 5 to go, I found myself among the 19 women left, and knew that a top 10 was attainable! With my good finishing position, I got 6th place. I was super happy with that! I was rewarded with a relaxing message to get me ready for the final race- the hilly Whiterock road race.

So the next day came along, and by this point, everyone's feeling the week. This was a hilly 80 km race with close to some 15% grades. I managed to stay in with the leaders by chasing back on after the climbs, but the pace was so up and down, that it was super taxing. Still, I stayed on, should have drank more and crashed with ½ lap to go. I just tapped a wheel in front of me and supermaned off my bike. I had very little road rash, and wanted to finish the race, but my shifter was broken. This was the first race ever that I didn't finish.


So Superweek was a fun week and a great learning experience! The day after it ended, I flew off to California for a week off the bike, and then it was off to Elma for the Northwest Junior Stage Race!