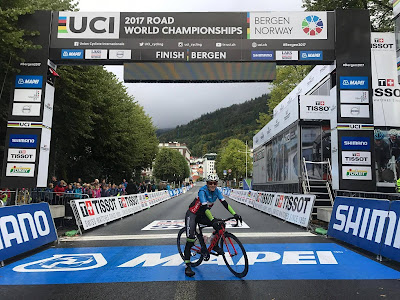 Race day was a little hectic with one of us 4 junior girls crashing on the way over to sign on, us all getting split up, getting minimal warm up and of course, being Canadian, a back row call up. As soon as that whistle blew, I knew my body was going to hate the day. I am still not sure if it was something I ate that morning, or simply nerves, but every time I went to push myself I was extremely nauseated with a gag reflex. Not to mention still recovering from my Track Worlds crashes. That made for a fun time up the 1500m Salmon Hill. Thank goodness for my fearless descending skills so I could chase back on almost every time except with 2 laps to go. I then ended up back in a chase group, got squeezed out by another rider, hit the curb and went down with about 7km to go. I bitterly dragged myself and my beat up bike across the line, except despite everything, couldn't help but smile a little on my last solo effort up Salmon Hill when the Norwegian fans started chanting "Go Canada Go!".


And well, after Norway I sent my bikes home with my dad and flew to Rome, Italy to meet my Aunt and Uncle for my grad present of a 10 day vacay in the sun. Pools, shopping, the Amalfi Coast, the Colosseum... perfect way to end the season and my first big European adventures! 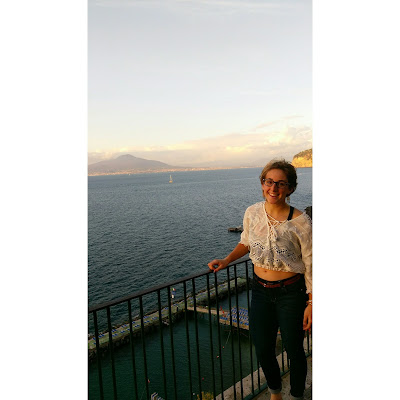 However, surprise! I had 9 well spent days at home, then back to Milton for a prep camp for my first Elite Track World Cup in Warsaw, Poland. I went with the elite National Team as the alternate for Team Pursuit and the Points Race rider. I ended up just riding the Points Race, which was a super eye opening experience. The field consisted of 6 World Champions of different disciplines and I was very proud by the fact that tactically, I could race with them and belonged there, just physically I wasn't quite strong enough to come around the likes of Kirsten Wild and Amalie Diderikson. I ended up 5th in about 3 sprints, so just shy of points! The whole experience of the World Cup circuit was incredible though, being at the buffet and stretching in the gym with World Champions and Olympians was so inspiring and I definitely fan girled quite a bit. I also ended up making quite a few friends as I made it my mission to talk to as many cyclists from other countries as possible!

Anddd finally some time spent at home, about a month and a half. After a couple of weeks off the bike, spent running, going to the gym and yoga and riding my horses, I fell back into my usual daily training routine. I started working on some online University courses towards my Bachelor of Science, major in Biological Science degree and decided to wreck myself all at once and kick off the University life with Physics and Calculus! This downtime was much needed as well to physically get my body back to a healthy place, re-energize, address my calorie deficiency, etc. I also started coaching spin classes at one of my biggest supporters, TaG Cycling. And let me tell you, it's SO MUCH FUN!! I never realized how much I love yelling motivational things at people and making them suffer on the bike while putting together rad music playlists!


That brings us right into the New Year and wasting no time I was on a January 2nd flight back to Milton for a pre-camp for the final Track World Cup in Minsk, Belarus. This was an insanely fun experience, as they sent the Next-Gen/development National Team and 4 out of the 5 of us had ridden team pursuit together at the 2016 Junior Track World Championships. We're a very close team, and kitchen dance parties or horror movie marathons are not uncommon. I rode Team Pursuit, Points Race and Madison at the World Cup, and our Team Pursuit had 3 flawless rides, new personal bests and we ended up with the bronze medal around our necks behind USA and Italy! Not bad for our first World Cup/race together! 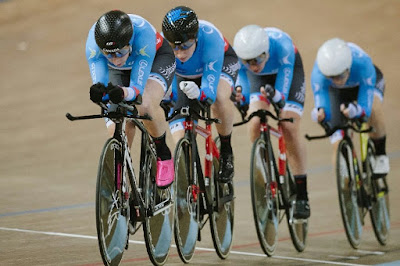 And now (if you have made it this far!) you are completely caught up to where I sit right this moment, in a tiny Air bnb in downtown Gent, Belgium ready to race the Belgian International Trackmeeting starting on Saturday, flying the TaG colours and with my dad as support. Next week, I hop on another little flight up to Copenhagen, Denmark for the Copenhagen Six Day (the women's cup is actually only three days) to conclude my first little Europe block of 2018 before heading home. 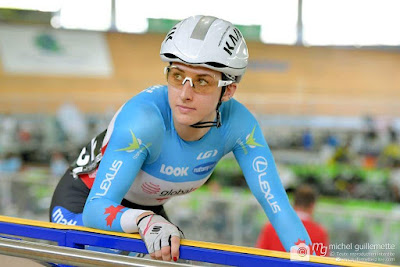 It's been an amazing start to the year, and it's only going to get bigger and better as I take on my first year as an elite, riding for the Quebec based women's team, Macogep-Argon18-Girondins p/b Mazda which will allow me to race major North American races as well as a couple of blocks in Europe. On the track side of my year, I have set up an Omnium 2020 Project, where I will be targeting major UCI track races to gain valuable race experience and UCI points.


I would like to say thank you to the whole Lares-Waowdeals family for housing and supporting me over in Europe last year! 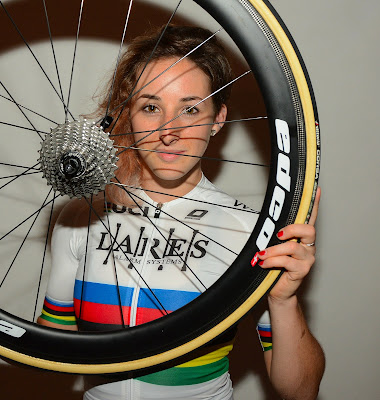 Also, a big thank you to everyone who showed me so much love and support last year as I hit some pretty big milestones in my junior cycling career! Here's to more great things to come :) 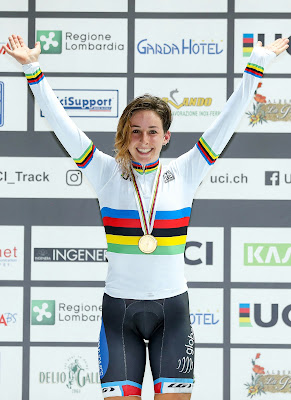 I would like to welcome FullSpeedAhead and Vision Wheels on board for this year as well as thank you to TaG Cycling Race Team, BORN Sportscare, Ryders Eyewear, Power2Max, theblackline, ISM Seat, Orange Sport Supply, Cycles Lambert, Obsession Bikes, Evoc, Global Relay #bridgethegap and Cycling Canada for the ongoing support!