March 02, 2014
When we first arrived in Elma for the Rapha Junior Stage Race on August 2nd, I was already so nervous. I could not stop picturing how the races would play out, using the strategies that me and my dad had talked endlessly about. We went out and rode the courses that evening, explaining techniques to my younger sister Kaelen, who was about to get a taste of stage racing for her first time. Seeing the course eased some of my nerves and excitement started to set in. The courses were amazing! Being surrounded by the abandoned nuclear power plants made for a very unique (and somewhat creepy) atmosphere!
We arrived at the time trial the next morning, and I couldn't suppress the smile on my face! My stomach was tied in a knot of nerves and I felt like I was going to throw up! Boy, I love race days! After signing in, pinning my number and watching my sister sprint away, all smiles, in her first T-T, I got on the trainer with my i-pod blasting J.LO, for my warm-up. My dad (coach) instructed me to increase the intensity over 20 minutes, then do some sprints.

I lined up on the line in my girls 15-16 category (I got upgraded), chasing the 17-18 girls. Off I went, tucking into my aero position and keeping my eye on the girl ahead of me. Time-trials could win or lose someone the race, so I knew how important it was to go my hardest. I thought I was catching the girl ahead of me, until she started disappearing around the corners, slipping away from view.  4 miles in and my legs were on fire! A quick glance behind me, showed the 30 second girl chasing me closing in quickly. She was so close at the turn around point,  she eventually passed me! I came out of the race so disappointed, but knew I had to immediately turn my disappoint around before the crit and use it to make me race harder. It didn't quite play out how I would have liked! When results were posted I found out I came in 5th in an 8 girl category! Kia Van der Vliet won, with an impressive 1 minute and 40 seconds on me.

I couldn't stop shaking from nerves and excitement preparing for the crit, but the course was a great course for me, and I knew what I had to do!  It was an uphill start, and I was expecting people to take huge advantage of it and go hard right away. To my surprise, it actually started out at a slow, easy pace, that gave everyone the opportunity to get into good position right away. Instinct had me go right to the front and sit second or third wheel, careful not to get boxed in.  The bell rang for the first prime and I started my attack early, going for it. I knew that if I got a prime under my belt I would feel more confident about the race. I won an Oakley hat on the line! Sweet! I sat in for 15 minutes after that, and since nothing happened, I launched a few attacks, none of which stuck. There were more primes and I calculated which ones I would sprint for. One of my goals is to always animate the race, and that is what I did. What is fun about riding around in a circle for 40 minutes? Some girls got away with 4 laps to go, but we chased them down before the final sprint. I had bad positioning going into the sprint, and knew that I would have to pick up the pace and attack off the front at the bottom of the hill. Two of the age 17-18 girls took first and second place on the line, but I got third in the sprint and first out of the 15-16 girls! Though that still meant that I would have to get away in the road race to make up the 1 minute and 40 seconds on the leader!

I rode up to the road course the next morning, after packing up camp, and sending my sister off for her first road race. After warming up and embarrassingly, falling over in soft sand on my way to the start line, we rolled out and got under way! I rode the first lap out, taking part in the pace line and getting to the front to ride at about 80% on hills to see if I could shake anyone off the back. On the second lap, Kia Van der Vliet and I seemed to have the same idea in mind. We both attacked and counter-attacked, animating the race. On the hill on the second lap, I attacked and got away! I was by myself, riding my absolute hardest up the hills. A chase group was after me, but I was creating a big enough gap to get “out-of-sight, out-of-mind.” I took no rest on the decent, flying around the corners, aware of the chasers coming in and out of view. I time trialed on the flats focusing on slowly increasing my speed and intensity. I forgot about everything, except for the fact that I had just attacked and stayed away by myself, and that winning would mean I would get to spray the champagne (sparkling apple cider) for the first time on the podium! It was so unreal and I couldn't stop smiling as I rode across the line and threw my fist in the air as a victory salute! Kia came across the line exactly 1 minute and 40 seconds behind me! Who won? I was so nervous waiting for the results. When they were finally posted my sister ran over to me saying that I won, and, when I went to look at them for myself I saw that I had won by .08 seconds! It is crazy how close that was!

On the podium, I excitedly sprayed the other girls with sticky apple cider! It was some of the closest, most intense (not to mention fun) racing that I had ever raced!


Thank you so much to Rad Racing, Erik Anderson and the sponsors for putting on such and amazing race! Everything about it felt and was professional! It was such an amazing experience! See you next year! 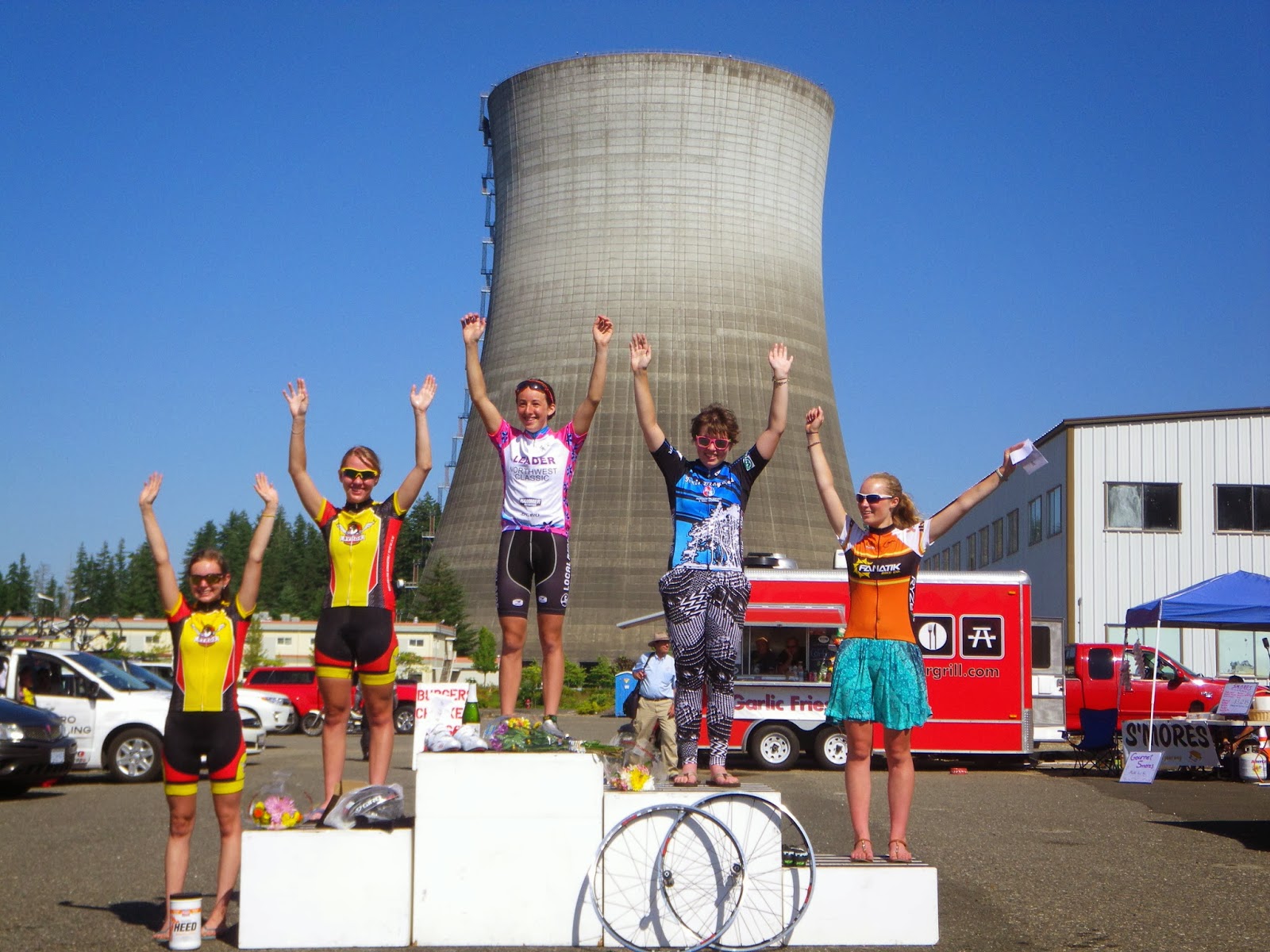